This post and the photos within it may contain affiliate links. If you purchase something through the link, I may receive a commission at no extra charge to you.

Are you confused about the difference between hand lettering and calligraphy?

Perhaps you didn’t even know that a difference existed between the two.

In this article, we will take a closer look at how exactly hand lettering differs from calligraphy.

Before we jump right in, let’s have a quick overview of the table of contents –

Don’t worry, by the end of this post, you will have a clear understanding of the difference between these two art forms (and more).

If you prefer watching over reading, I’ve also made a YouTube video you can check out instead –

The difference between hand lettering and calligraphy is –

Although both hand lettering and calligraphy are visual art forms related to letters, their main difference is the method used to create the letters. Hand lettering focuses on drawing and illustrating the letters. Calligraphy, on the other hand, is the art of beautiful writing.

The image above is a visual example of the difference between hand lettering, calligraphy, and typography.

These terms are often used interchangeably. However, as you can see, they are quite different from each other.

In other words, the difference between hand lettering and calligraphy lies in the process and not the end result.

In the video below, I will create the same word in the (almost) same style, but one will be done in calligraphy and the other one in hand lettering.

Note – it’s quite understandable that if you are a complete beginner, you will struggle to spot the difference on a final piece (without seeing the actual process of creation). With time you will start developing your eye to notice these differences effortlessly.

Let’s have a closer look at these art forms to better understand the whole story.

Calligraphy is a visual art form primarily focused on beautiful writing. Calligraphy is commonly created using specific tools such as a pointed nib, a broad-edged nib, a brush, etc. The emphasis here is on the writing aspect, meaning that the letterforms are usually executed in a single motion.

When we say calligraphy, we have to think of it as an umbrella term that contains many different styles of writing.

First of all, calligraphy can be divided based on worldwide cultures such as –

Here are a few quick examples.

For now, I solely focus on Western calligraphy.

With that in mind, let’s have a quick overview of the different styles of Western calligraphy.

It’s also important to mention that cursive writing is different from calligraphy.

Includes the calligraphy styles developed throughout the history of the Latin alphabet, which dates approximately since 600 BC.

Here are a few traditional calligraphy examples from some of my favorite artists on Instagram.

I won’t bother you with the whole history. Still, if you are interested, I wrote a more in-depth article covering the development of the Latin alphabet throughout two-plus thousand years.

Quick note – When we talk about different calligraphy styles, we don’t refer to them as calligraphy fonts.

We refer to them as calligraphy styles or scripts. In today’s digital age, fonts are what computers use to write.

The easiest way to explain what modern calligraphy is – any calligraphy style that doesn’t follow the strict rules of traditional calligraphy.

I have a separate in-depth article on modern calligraphy and how you can get started with it. You can check it out here.

Another way that calligraphy differs from hand lettering is by using specific tools for writing.

You can use a pointed nib, a broad-edged nib, fountain pens, brushes, etc.

That all depends on the calligraphy style, you are working with.

Ok, now that you have a general overview of what calligraphy is, let’s proceed.

Quick note – Did you know that one of the best tools to start practicing calligraphy is just a regular pencil?

What is hand lettering?

Hand lettering is a visual art form that primarily focuses on drawing and illustrating letterforms by hand (hence the name). Unlike calligraphy, where we write the letters, with hand lettering, we are drawing the individual letterforms.

In hand lettering, the letters are most commonly drawn or sketched with a pencil and then outlined with various pens and markers.

In contrast to calligraphy, for hand lettering, you don’t really need a specific tool.

In fact, you can do hand lettering with pretty much any writing tool that you have.

Here are a few hand lettering examples from some of my favorite artists on Instagram.

Hand lettering is based on certain rules we use in both calligraphy and typography.

However, there are so many different ways you can stylize your letters.

If you want to learn and improve your hand lettering skills, you will, without a doubt, benefit tremendously by having even just a rudimentary understanding of typography and calligraphy.

I won’t dive into the details here, but I wrote an in-depth beginner’s guide on hand lettering and how you can get started with it. You can check it out here.

If you are interested to learn more about the different lettering styles, you can check out this article that I wrote.

Typography using moveable type can be dated all the way back to the 11th century.

However, a defining historical moment was the invention of the mechanical printing press machine by Johannes Gutenberg in 1439.

In the current digital era, typographers mostly work with premade computer fonts. Like the one you are reading right now (which is called Nunito btw.).

It’s also essential to distinguish type designers, which are the ones creating these insanely precise letterforms.

Interestingly enough, these letterforms are initially sketched on paper and then later digitized and polished to perfection.

Not only individually but also in combination with different letterforms, etc.

This is an extremely elaborate process that can take months or even years to complete.

Fun fact – The creation of one of the most popular and used typefaces in the 20th century – ‘’Futura’’ took three years to complete!

Since this is an article about the different terminology, I figured it would be an excellent opportunity to shed some light on other commonly used terms.

This is a popularly adopted term that, in most cases, refers to calligraphy created with a brush pen.

To be 100% entirely correct, this would actually be brush calligraphy since you are actually writing the letters and not drawing them.

Nonetheless, I don’t think it’s necessary to take it that far, and it’s totally fine to call it to brush lettering. I also have an in-depth tutorial on brush lettering that you can check out here.

This one can be a bit tricky. I would say that it’s a combination of the two.

On one hand, you are technically drawing the letters, but you are doing so to imitate the look of calligraphy (hence the name).

I wrote an in-depth step by step tutorial for Faux calligraphy that you can check out here. It’s super fun and easy to get started with.

Sign painting is an art form that combines both calligraphy and hand lettering in its own unique way along with specific tools and techniques.

It’s an art form that picked up its popularity in the early last century to place advertisements on buildings, billboards, signboards, etc. (hence the name).

With the rise of the computer and digitalization (80’s), sign painting faced a steep decline in interest.

I also wanted to mention one of my all time favorite documentaries called ”Sign Painters”.

Chalk lettering is pretty straight forward. It’s hand lettering done with chalk. Most commonly on a chalkboard or wall. And guess what? I have a step by step tutorial also for that 😀 You can check it out here.

Why does all this matter?

It matters because then we can go around and police people when they use the wrong term.

The answer to this question is subjective and depends from person to person. As a hand lettering and calligraphy artist, I believe that understanding the terminology and the different art forms is of high importance.

These art forms are complex in their own way and they take years of studying and practice to master. Understanding the basic terminology is kinda like ground 0, and I truly believe that you can only benefit from understanding it.

Perhaps someone who isn’t that invested in this whole world won’t really care that much about the different terms and simply call everything fonts. And you would be surprised to see how often that happens.

The bottom line is – if you want to learn the art of hand lettering & calligraphy, learning and understanding the proper terminology will help you immensely along the way.

Summing it all up – final words.

Ok, so let’s recap everything we just talked about once again.

Hand lettering is an art form that focuses on drawing/illustrating the letters.

Calligraphy is an art form that focuses on the beautiful writing of letters.

Typography is an art form that arranges letters (fonts) in a clear, readable, and visually appealing manner.

Remember – the difference is in the process, not the end result.

With time you’ll train your eye to spot these different art forms with ease.

Which art form do you prefer – calligraphy or lettering?

If you have any questions or wishes for future articles and tutorials, be sure to let me know.

Until the next time, 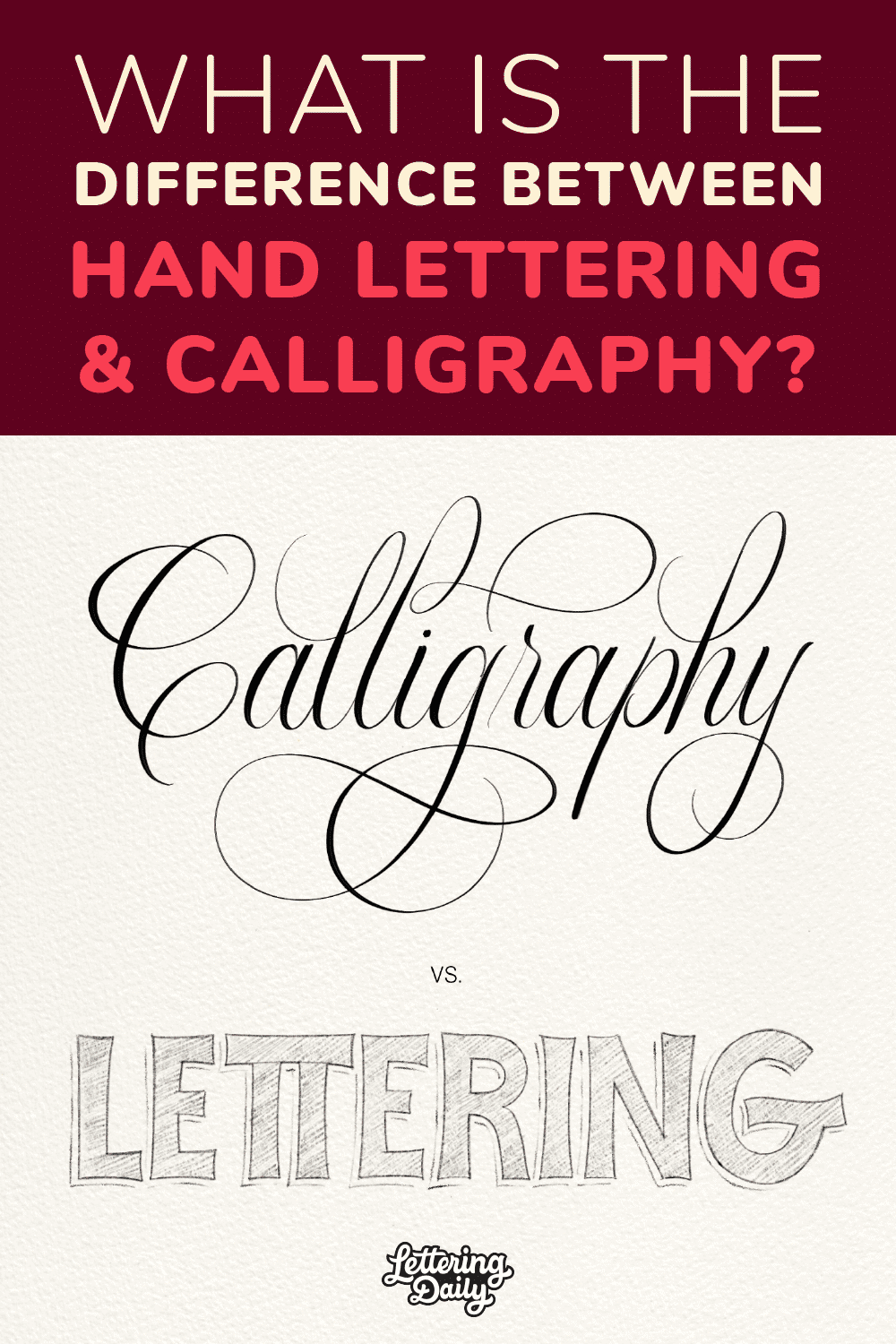 40 thoughts on “What is the Difference Between Hand Lettering And Calligraphy?”

Read more about me

Stay updated with my tutorials and get instant access to the Lettering Crate!